#ParkTV As I See Things (Three) 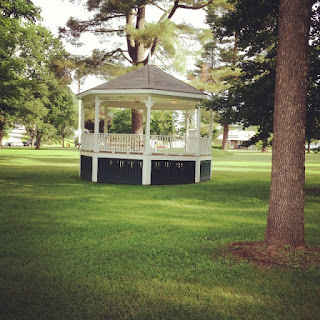 “May you live all the days of your life.”
Jonathan Swift


Living life is the only way to live life, right? For if you’re not alive you’re obviously not living. I wonder if Swift meant “live it up” or maybe he meant to be aware of every moment. Perhaps his words slipped out or someone misquoted him.


Anything’s possible. We obviously can’t ask him what he meant since he died hundreds of years ago. We can’t question the dead. Finality is the hard part about death.


My late father John Braun (his obituary) was terrible at small talk. Once he asked someone, “When you walk to work, do you walk to work?” It was one of his most quoted quotes. He had a few good ones.


After he died, memories of him tended to wash over me almost constantly. I thought of his many funny stories and his advice a lot and now that he’s gone, I have to figure things out without him, rely upon myself and find my true voice.


My courage to stand up against the establishment came from my father. He often said, “Remember, you’re Amy Goddamn Braun. Never let them tell you otherwise.” In other words… be yourself and follow only what you know to be true.


Even though I have little control over the outcome, it’s been important to express my feelings about local politics. As verbal and unfiltered as I can be at times —like my father— no one doubts where I stand. He would be proud.


Although the town of Rochester voted “NO” to the Model One Merger in late June (read here for more information), the Study Committee (706 B) for the Supervisory Union still had to free us.


We have been under 706 B’s control (forced to be a reality because of Act 46) from the beginning and they had to VOTE to relinquish this control! If you’re not confused, that’s because you haven’t attend enough meetings.


There have been SO MANY meetings and either my husband or I have attended as many as possible to stay ahead of the curve. 706 B was formed to make decisions for the children of our town, the majority of these meetings were not held in our town and public comments were taken at the END of every meeting. 706 B members from other towns said things like: “I know this is bad for Rochester but…” or “I’m aware the travel for Rochester will be more and the hours longer for the kids but…” And then 706 B voted to make Model One our only choice.


Okay… okay… that’s in the past and I should let it go, but we still had another hurdle: Article 13 (which was later added to this document ). If you are from Rochester, please read the chart entitled Attachment C on page 31 and notice that the Bingo Property (DEEDED TO THE CHILDREN OF ROCHESTER) was to be transferred at no cost. Hmmm. Also note this language on page 18: “Note: This table is for illustration purposes only. These models are estimates and projections. Actual tax rates will vary depending on state policy decisions, actual changes in equalized pupils, and spending decisions of boards. Note also that these tax estimates do not include possible excess penalties, particularly for Rochester in the "No Mergers" scenario.”


In other words: “Resistance is futile.” We are the BORG!" Give up. We know what you need. Infuriating.


Okay. I’ll stop. It’s in the past. Or is it? Why was fear used? I am still bitter about this and at times I wonder what’s next. Seems like it is best that we maintain local control, no? Or at least make sure that the entity in control is not on the other side of a mountain.


At length on July 6th, 706 B and the public discussed what to do next. At one point a person from Bethel sitting next to me whispered, “I don’t understand what’s going on. I thought Rochester voted no. Doesn’t that mean you’re done with the merger? What is this meeting about anyway?”


She asked, “Do you know what Plan B is in the medical world?” She’s a nurse.


After I shook my head no, she told me Plan B is a code name for the abortion pill. Then she said, “Abort. Abort. Abort the mission.”


I laughed. What else was there to do but laugh? This whole thing has been exhausting and confusing. It was designed that way. Here’s another good quote I’ve been thinking about lately: “If you are not confused, you don’t know what’s going on.” Jack Welch.


Uh-huh. That about sums things up.


Of course there was a lot of discussion. The woman next to me raised her hand and declared, “I’m sorry, but I don’t understand what’s happening. What’s next?”


The head of 706 B patiently explained the situation in different terms, after which I felt even more confused. Affirmative is negative. Not moving. Voting. Dissolving. Affirmative. Ok. Resistance is futile. You will be assimilated.


And alas, one of the members of 706 B from Bethel said, “I came here tonight with a different opinion but now I changed my mind. I don’t want Rochester to have to be attached to us anymore. I don’t want to hold anyone hostage. Rochester should be free to go off and do whatever it is that they want to do next.”


Yes! I was so relieved that she was willing to let Rochester go. But now 706 B has more work to do as they have to find another solution for Bethel and South Royalton. I am sorry 706 B members. It is not your fault. It was created this way. Designed to enmesh us. To scare us.


But letting Rochester go was the right thing to do. We have been released. I fought tears of relief. Tears of gratitude.


Lately my tears are so close to the surface because I’m also grieving the loss of my father. Time will help. Rituals help too. Help me to let go. To release him.


Just a few weeks ago, when my cousin held a memorial for my father in Georgia we had several rituals: two Marine’s folded a flag in his honor and presented it to my oldest brother, Chris. They also gave a small flag to my father’s widow. We told stories and watched a slideshow of his life. Then by the pond we set off fireworks and lit five Japanese lanterns and released them. As the glowing orbs drifted up, I thought: Bye dad. I’ll miss you. I’ll miss hearing your laugh.


After the orbs disappeared from sight I noticed that a swarm of red ants had crawled from the warm Georgia soil and onto my feet. I swiped at them as they nibbled.


And yes dad, when I walk to work, I’ll walk to work. I’ll think of you sometimes and I’ll smile.

My Resolution Watch this video to get a sense of how it feels to be teaching full time and in person during a pandemic.